Letter by Laura Dexter of Whitesborough, New York, 1841, with postmarked integral address leaf to Edward North and reads in part: "McLeod's trial is the all absorbing topic of the day, our quiet, peaceible village, has been under military guardianship for many weeks, by orders of our good & careful whig Governor," William Seward, "an armed band have patrolled our streets, breaking at intervals the still watches of the night. I am thankful that thus far, the law has taken its course, & McLeod is unmolested, but I fear the result, if he be acquitted, as many curses, both loud & deep, have come forth against him, and a war with England instead of being deprecated, seems with some to be the great desirable."
Posted by Olive Tree Genealogy at 6:44 AM

A 3 page letter with a red paper seal on the front., from the State of New Hampshire., Rockingham County., an order to the sheriff. A citizen is asking for the arrest of another for his crime of breaking and entering his home and stealing all sorts of items.

He used force to enter his home., he stole 50 lbs of salt pork, 20 lbs butter, 3 lbs of candles, 12 silver spoons, one silver butter knife. The letter is more detailed, has other pages of description of the thief., named Andrew J. Glover., with the autographs of the Judge and the Sheriff and the person who has filed this arrest order, Elbrdige Robinson.
Posted by Olive Tree Genealogy at 8:20 AM

Up for auction on Ebay is a group of 40 handwritten vintage love letters to a woman by the name of Daisy B. Smith who lived in Kokomo Indiana at the time these letters were written. The letters are written by her soon to be husband, Howard Spitzer who owns his own business in Mount Vernon Ohio called “Spitzer’s Shoe Parlors.” The earliest letter is dated March 21st, 1912 and the last letter September 1st, 1913 only 9 days before the couple gets married.

…..I sure wish I lived close enough to you so we could take a moonlight ride. I am fond of them aren’t you. Well we will keep getting acquainted better every day and I am going to reveal a secret to you right here and I trust you will forgive me for not telling you sooner. Now hold your breath. Do you remember one time I wrote you and told you that I did not like the southern girls, however I was foolish enough one time to marry one and I am what some people call a grass widow. Now what do you think of that. We could not get along together so we called it quits. I know this will be quite a surprise to you and I have wanted to tell you for some time but have just put it off……I don’t believe you would be satisfied away from your people….I remain as ever, C. S. McCalister. Sunlight Mfg. Co.”

This group of letters would be a fantastic find for someone working on a Spitzer genealogy.
Posted by Olive Tree Genealogy at 9:41 AM

Letter written March 22, 1846 from New Orleans by Hiram A. Goodlett to his mother, Mrs. Harriet Goodlett, in Alexandria, Benton Co. Alabama. Benton County’s name was changed to Calhoun County in 1868. The letter includes a ½-page note to his brother Alfred.

Important letter filled with fascinating observations about New Orleans, its population, fashions, etc. Hiram begins by writing that he had become uneasy, having received “Only one letter in two months.” He continues, “This is a great and growing city, and I think I shall do well here yet…There are people of all nations and kinds here…The rich and the poor are near neighbors…Poor people ought not to live in cities [because] it requires wealth to be fashionable, and if families do not follow fashion, they are out of the world…All cities are more or less filthy, and a person from the country accustomed to neatness, though poor, would be disgusted with what they could not avoid…It is a great benefit to a person, of the right turn of mind, to live awhile in a city…A farmer settled in a good country, with enough for independence, is the happiest man on earth…Most persons [in New Orleans] dress finely, and the women extravagantly…There are three theatres, circuses, galleries of paintings and numberless other places to take a man’s money.”
The note to Alfred encourages him to continue his studies: “study Book Keeping…You ought to improve your handwriting by all means.” He suggests that if Father can sell the lot “on which there is a meeting house” near Goldville (some distance from Alexandria), their father can have Hiram’s share of the proceeds.
In addition, there are descriptions of the City’s distinctive cemeteries, the Mississippi River and its steamboat traffic, ships, etc., the cost of lodging and his difficulty finding affordable accommodations, cotton seed that he is sending and wants Alfred to plant (“The seed is worth $4 per bushel here.”), “I was vaccinated two weeks ago and it took well, so I shall not fear the Small Pox”, etc., etc.

Posted by Olive Tree Genealogy at 8:55 AM

1864 Civil War Letter written by a Mississippi Riverboat Captain relating to work on the river with his Sidewheeler - the "Polar Star". The letter is dated December 2nd, 1864 from St. Louis, Missouri and written to Horace Holton's cousin George at Charlestown, New Hampshire.
The Letter reads in part: "Dear Coz George, /I think you owe me one but I will overlook it. I have had a gay old time since I wrote you. been 9days, most all long ones on a sand bar in the middle of the "big Muddy" only 40 miles below the City. I loaded my Polar Star for Duval Bluffs, Ak and started with an old hull in tow for Cairo on the 19th of Nov. and when 20 miles down struck a bar & snapped all my tow lines like pack thread. The boat wiggled off without difficulty & I caught the hull before she grounded & again we went on our way rejoicing. About 40 miles below at Herculaneum bar we grounded again and our hull floated 4 miles down the river & lodged on a sand bar... It took me 3 days to get the boat off and 6 days to get the hull off and then the water had fallen so much I had to leave it and 1105 sks (sacks?) of oats & sending the other boat along, come back to get another boat to tow the hull and take the oat along. Total loss by detention $4,000... This is some of the beauties of Steamboating, How would you like it when you come out West to see me, I will take you down the river, if I own a boat then, and let you see for yourself.... / Yours, (signed)H. H.".
Posted by Olive Tree Genealogy at 3:02 PM 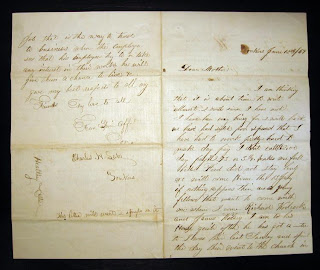 Dear mother I am thinking it is about time to wright.....Charles tells his mother about his work, pay and friends which he wants to bring home for a few days. He also tells her “they enrolled our names last weak so we are all right for the next draft when they draft I will make track for some place unnone this world is larger bigger than New Milford mutch as two [ ? ].”
Posted by Olive Tree Genealogy at 3:24 PM

Letter from Israel Putnam. Malone Books, Stationery, Fancy Goods, etc 52 Dauphin Street, Mobile Alabama. Dated Feb 19, 1866. It is a letter to G&C Merriam regarding their debt advising that they have been "pressed" and are only able to pay a portion of their balance and willingness to pay interest should they "say so". A post script advising they sold their house and lot in Eufaula and will send payment to settle off old claims once "the deed can be made out and the money paid".
Posted by Olive Tree Genealogy at 2:28 PM

To the mayor of Rahway, New Jersey. In full: “There died at this place on the 8th inst. Of Typhoid Fever a young man of the name of Geo. Jackson whose parents and family reside in your place as ascertained from letters found among his effects. Will you be kind enough to break this sad news to them and inform them that a letter to me will be answered giving full particulars as regards his effects &c. Respectfully, Dr. A.A. Mix, Public Administrator, Yuma Co., A.T.”