Letter dated "Upton Ranch, LaCinta Canyon, Solano, N.M." [New Mexico], October 11, 1908, written from a lady named Irene to her friend Carroll Benton in Boston. She describes some aspects of ranch life and family news, and then casually mentions "We had two shooting scrapes in one day this week & as I happened to be in town when the first started up, I came near not getting home. A Texan sheriff came in after a saloon keeper, the saloon keeper swiped a horse and beat it out of town with a 30-30 across his saddle. After him two sheriffs with six shooters drawn, then five minutes later four more joined the party. The man headed right for the canyon and of course we couldnt go home on account of possible shooting. Same night our town blacksmith got drunk and went after the Texan sheriff on an old score and shot up town before he was arrested".

This fantastic leter is up for sale on Ebay Item number: 200302264010. This would make a great addition to your genealogy if you are related to Carroll Benton.
Posted by Olive Tree Genealogy at 7:31 AM

An letter from William Okeeff in New Haven, Connecticut, March 21, 1898 which includes the envelope. This letter says, "Dear Madam, In the matter of the W.S. Swane note we have been unable to serve papers on the maker of the note as he has eluded the sheriff. If we are able to make service we will collect the note and damages as he is in a position to pay but manages by fraud to keep his money out of our way.....Yours truly, William Okeeff.

Letter dated 1794, where John Pitts of Tyngsborough, Massachusetts has written to Captain Josiah Danforth regarding a court case coming up..he tells Danforth to present his case to the General Court and if all the facts are out, justice will prevail..signed on back, your friend Jn. Pitts.

This great batch of ww1 letters is for sale on Ebay, Item number: 120362350200. If Chrissie Hansen is part of your family this would be a great addition to your genealogy.
Posted by Olive Tree Genealogy at 2:30 PM

ONE LETTER DATED 1795, from Dover, Delaware., written and signed by John Fisher., Forwarded by William A. P Phelps. A notation states the letter is from the Chief Justice of Delaware., letter is about his wife and goods being bought for her.

ANOTHER LETTER dated 1826., has MS markings of PAID and a small PAID 5 in the upper right corner., about a Court Martial and at the bottom of the address., asks the postmaster to forward this without delay to Mr. Sherman. Curious no town marks., but likely Connecticut being addressed to a fellow in North Milford, Ct.

ANOTHER LETER dated 1834., from John P. Cushman., to Hon. James McKown., hand stamed in red STEAMBOAT., with the word STEAM over the word BOAT., upside down with a rate of "12"., from Troy, N.Y. About the President of the New York Medical Society.

ANOTHER LETTER:, dated at Albany, NY July 11, 1823., marked FR [means Free] addressed to the Hon. Smith Thompson., Sec. of the Navy, Washington. Letter concerns a young lad's recommendation., likely to the Naval Academy or for a position in the Navy. The writer's name is hard to make out, appears to be Fr. Bloodfood, or Bloodford. 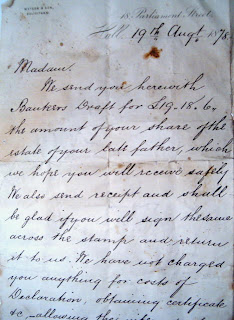 Apparently Miss Annie Maria Russell of Hackettstown New Jersey had requested addresses for her brothers but Solicitors Watson & Sons, 18 Parliament Street, Hull said they'd received their shares of the fathers estate and he didn't know where they were.

Dailey writes to "Eddy" [Edward Elmes of Maine]. In full [original spellings and punctuation retained]: "To day I have been thinking of you and that I had ought to send you some some little token of friendship for you have been a good boy and have been kind and good to Mother and Zylpha since I have been away and Eddy you will always find a true friend in me[.] I hope you will do as well as you have while you stay with Mother[.] I should like to have you stay thru all summer if your Father and I can agree[.] I will send you a little present[.] I can not get much here to send you or I would give you something handsome[.] But be a good boy. Take good care of the things and I will make you a handsome present when I get home[.] I should like to have you with me if you will[.] I shall have to write Zylpha a short letter so I will close[.] Be a good boy Eddy and remember you will always find a good friend in me[.] With much love...."

This great old letter is for sale on Ebay Item number: 160307521898. This would be a great find for someone working on the genealogy of the Dailey family.
Posted by Olive Tree Genealogy at 1:23 PM

Letter dated 1818, Port Au Prince, where Captain William Van Allen has written to merchants in Philadelphia regarding some courageous events in the capturing of Spanish ships; travelling with the USS Hornet, going up against a 16 gun Spanish Ship....capturing goods from a smaller ship, exchanging more gun fire...being captured and losing his crew.....making a bargain to get his crew back....
Posted by Olive Tree Genealogy at 3:38 PM